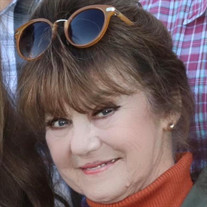 Brenda Gail Smith "Gigi”, age 74, of Arnoldsville, Georgia entered Heaven on Thursday, January 21, 2021. Mrs. Smith was born on July 6, 1946 in Baldwin, Georgia to the late Marlow Jordan and Dolly Jordan Aiken. In addition to her parents, she was preceded in death by her mother Dolly Jordan Aiken, her father Marlow Jordan, her stepfather Reverend E.L. Aiken, and her brother, Randall Jordan. Mrs. Smith was a long-time member of Cornelia First Baptist Church, Baldwin Baptist Church and most recently attended Briarwood Baptist Church in Watkinsville, Georgia. She was employed for many years by the State of Georgia with the Department of Industry and Trade promoting hospitality across the State of Georgia. In 1988 she and husband Larry envisioned and established Smithville Village. For more than fifteen years they hosted thousands of tourists as they strolled through their unique shops and hosted over 500 weddings in the Smithville Chapel. After retirement, Gail and beloved husband Larry continued to thrive as micropreneurs. They parlayed Larry’s love of woodworking and Gail’s propensity for sales/marketing into a business. They crafted birdhouses based on replicas of historical homes. Their birdhome’s were featured in Vogue and Southern Living Magazines. Gail (Gigi’s) greatest joy was her family. All other interest paled in comparison to her three grandchildren. Watching baseball, tennis matches and attending honors night were top priorities. She overcame insurmountable medical challenges throughout her life, with courage and grace. Her family finds comfort in knowing the day will come when all will be reunited. Survivors include her loving husband, Larry Smith; daughter and son-in-law Amber (Mike) England Watkinsville; sisters, Shirley (Arnold) Meeks, Marilyn (Aubrey) Motz, Carolyn (Milton) Stewart, brother, Donnie (Elizabeth) Jordan; grandchildren, Jordan, Emma, and Wyatt England. Private Graveside Services were held at the Yonah Memorial Gardens on Tuesday, January 26, 2021. Arrangements have been entrusted to the Whitfield Funeral Homes & Crematory, North Chapel at 245 Central Avenue, Demorest, Georgia 30535. Telephone: 706-778-1700.

The family of Brenda "Gigi" Gail Smith created this Life Tributes page to make it easy to share your memories.

Send flowers to the Smith family.