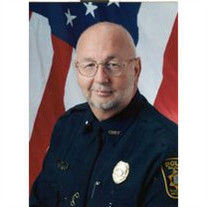 BALDWIN POLICE CHIEF, LAMAR H. CLARK, age 54, of Mt. Airy, GA, died Wednesday, May 10, 2006 at a local medical center. Chief Clark was born on May 29, 1951 in Habersham County, Georgia. He was a son of the late Clarence Clark, Jr. and Mrs. Imogene Harris Clark Simpson of Mt. Airy, GA. Chief Clark was a graduate of South Habersham High School and Piedmont College with a Bachelor's Degree in Psychology and Sociology. He was a United States Army Korean Conflict veteran having served in the military police during his time in service. He was a member of the Welcome Home Baptist Church. Chief Clark has served his community as a law enforcement officer for over 34 years having served as a patrolman for the Cornelia Police Department later serving as Chief of Police of Cornelia for 9 years. He was currently serving as Police Chief for the City of Baldwin. He was a member of the Georgia Association of Chief's of Police. Chief Clark has played a key role in the building of the new City of Baldwin Public Safety Complex; to be completed in the next few months. Survivors in addition to his mother, Mrs. Imogene Simpson, Mt. Airy, GA, include: his wife: Leslie Garris Clark, Mt. Airy, GA; his son and daughter-in-law: Brian and Allison Clark, Jefferson, GA; his son: Kevin Clark, Gainesville, GA; his sisters: Janice Smith, Clayton, GA; Beverly Pritchett and Jean Loggins, Mt. Airy, GA; his grandson: Will Clark, Jefferson, GA. Funeral services will be held at 2:00 p.m. on Saturday, May 13, 2006 from the Level Grove Baptist Church with Rev. Mickey Umberhant and Rev. Rick Darby officiating. Burial will follow in the Welcome Home Baptist Church Cemetery with full law enforcement honors. The family will receive friends at the Whitfield Funeral Home, South Chapel, Baldwin, from 2 to 4 and 7 to 9 p.m. on Friday. In lieu of flowers, memorials may be made to the Baldwin Public Safety Building Fund, in honor of Chief Lamar Clark, P.O. Box 247 Baldwin, GA 30511. ARRANGEMENTS ARE IN THE CARE OF WHITFIELD FUNERAL HOME, SOUTH CHAPEL, BALDWIN, GEORGIA.

The family of Chief Lamar H. Clark created this Life Tributes page to make it easy to share your memories.

Send flowers to the Clark family.