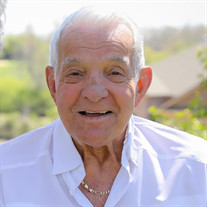 Mr. Dirk Maria Ludovicus Drost, age 81, of Cleveland, Georgia passed away at home surrounded by his family on May 5, 2021 after an extend battle with Alzheimer's. Mr. Drost was born July 1, 1939 's-Hertogen Bosch in the Netherlands to the late Dirk H. and Maria Waals Drost. In addition to his parents he is preceded in death by his brothers Johan and Thys Drost and a sister Jeanne Drost Dotter all of Holland; grandchild Elias Drost. Dirk lived in the Netherlands until he was 44, but while he was there he served in the Dutch Royal Air Force in the Netherlands for 15 years. Upon retiring he went into the catering business before moving to Naples, Florida. While in Florida he worked for Nissan Motors, then from there he moved to Alaska to be a service manager for Merceds-Benz. After 11 years he moved to Helen, Georgia where he met his wife Marion Edwards-Drost in 1988. He owned and operated The Gourmet Shoppe and Fox Winery in Helen for 23 years before retiring. Mr. Drost enjoyed music, tennis, ice fishing, traveling, playing solitaire, trips to the casino and most of all anything that meant he could spend time with his family which he deeply loved. Mr. Drost is survived by his wife of 30 years Marion Edwards-Drost of Cleveland; Son and Daughter-in-law Blake and Meredith Edwards of Gainesville; Daughter Leann Wright of Cleveland; Daughter and son-in-law Dana and Joe Patterson of Cleveland; Son and Daughter-in-law Matt and Rachel Edwards of Cumming; Special family friends Sam and Inez Silva of Cumming; Sons Alan Drost of England and Ian Drost of Alaska;Grandchildren Justin and Lindsey Stalnaker of Las Vegas; JoLee and Alex Matthews of Cleveland; Marlee and Austin Yearwood of Clermont; Amber Adams of Atlanta; Rylee and Bailee Patterson of Cleveland; Cade Edwards of Gainesville; Brody and Logan Edwards of Cumming; Shauna Jones of Atlanta; Isaiah Drost; Christa Berry; Rachel Drost; David Drost; Emalynn Drost; Jovie Drost; Great-grandchildren Molly, Emily and Jameson Stalnaker of Las Vegas; Bentlee Yearwood of Clermont and Danny Michael Matthews of Cleveland; Asher Weylin; Elijah Drost; Kayden Anderson; Amari Berry and Shiloh Drost; Sisters and Brothers-in-law Mary and Peter deGroot of Helen, Justina Drost of the Netherlands, and Thea Drost of Australia. In Lieu of Flowers the family has asked that donations be made at Alzheimers.org Arrangements have been entrusted to Whitfield Funeral Homes and Crematory, South Chapel at 1370 Industrial Blvd, Baldwin, GA 30511. Telephone (706) 778-7123

Mr. Dirk Maria Ludovicus Drost, age 81, of Cleveland, Georgia passed away at home surrounded by his family on May 5, 2021 after an extend battle with Alzheimer's. Mr. Drost was born July 1, 1939 's-Hertogen Bosch in the Netherlands to the late... View Obituary & Service Information

The family of Dirk Maria Ludovicus Drost created this Life Tributes page to make it easy to share your memories.

Send flowers to the Drost family.