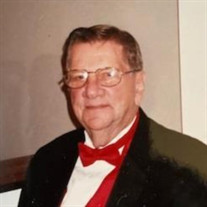 Eldon E. Fredericks, age 90, of Spartanburg, South Carolina formerly of Clarkesville, Georgia passed away on Wednesday, December 9, 2020. Mr. Fredericks was born on February 19, 1930 in Golden, Illinois to the late Fred Elbert and Carrie Franzen Fredericks. In addition to his parents, he was preceded in death by his wives, Helen C. Fredericks and Darlene Fredericks; son, Michael Fredericks, sister, Velora Hauk; and brother, Marvin Fredericks. Mr. Fredericks was a member of the First Baptist Church of Cornelia where he was a member of the Joy Sunday School Class, and the Shepherd's Ministry; he also served as an usher and was a former member of the choir. Survivors include his loving wife of 29 years, Shelby Hughes Fredericks, of Spartanburg; daughter, Debra Fredericks, of Atlanta; sons and daughters-in-law, Ronald and Kay Fredericks, of Madison, WI; and Larry Fredericks, of Atlanta; two grandchildren, and four great-grandchildren. Memorial Services will be held 4:00 p.m., Friday, April 16, 2021 at Whitfield Funeral Home North Chapel. The family will receive friends from 3:00 p.m. to 3:45 p.m., Friday, April 16, 2021 at the North Chapel prior to the service. Arrangements have been entrusted to the Whitfield Funeral Homes & Crematory, North Chapel at 245 Central Avenue, Demorest, Georgia 30535. Telephone: 706-778-1700.

The family of Eldon E. Fredericks created this Life Tributes page to make it easy to share your memories.

Send flowers to the Fredericks family.