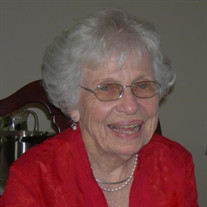 Eloise Cooper Crowder, age 100, of Cornelia, Georgia passed away peacefully on Tuesday, October 5, 2021. Mrs. Crowder was born on November 13, 1920 in Tignall Georgia to the late Lauren Wesley and Lulu Bobo Cooper. In addition to her parents, she was preceded in death by her loving husband of 72 years, Loy Crowder; grandchildren, Anna Eloise Hall, Ryan Perry Crowder, and Nathan Winslow Crowder. Mrs. Crowder was an active member of Homer United Methodist Church. She was also a member of PEO. She was a graduate of Berry College where she met the love her life, Loy. Eloise was a teacher and a homemaker. She loved to cook, bake and play bridge; she was the most gracious and loving hostess. She persevered against oral cancer at 94 and valiantly won that battle. She lived all over the world but spent the last twenty years back in Georgia where her heart has always been. She was loved by so many because she loved so big. She was a positive force in every life that she touched. By every measure that mattered, she was a wonderful steward of the life that God gave her. Survivors include her daughters and sons-in-law, Judie and Fred Wendt, of Alto; Suzi and Randy Hall, of Augusta; son and daughter-in-law, Van and Patricia Crowder, of Blacksburg, VA; sister, Guinelle Garrard, of Hickory, NC; brother, Jack Cooper, of Warner Robins, GA; grandchildren, Melissa Tymchuk, Frank Wendt, Mary Catherine Murray, Betsy Hall, Julietta Crowder; great-grandchildren, Mary Eloise Tymchuk, Augustin Tymchuk, Miller Wendt, Mary Clara Wendt, Charis Crowder, Micaiah Crowder, and William Murray. A Private Funeral Service will be held at Homer United Methodist Church. A Graveside Service will be held at 2:00 p.m., Saturday, October 23, 2021 at the Banks County Memorial Gardens with Rev. David Collins officiating. The family will receive friends at the Homer United Methodist Church Family Life Center Hall following the graveside service. In lieu of flowers, donations may be made in Eloise's Memory to Homer United Methodist Church: 141 Sycamore Street Homer, GA 30547 or Berry College PO Box 490069 Mount Berry, GA 30149. Arrangements have been entrusted to Whitfield Funeral Home & Crematory, South Chapel at 1370 Industrial Blvd, Baldwin, Ga 30511. Telephone (706) 778-7123.

Eloise Cooper Crowder, age 100, of Cornelia, Georgia passed away peacefully on Tuesday, October 5, 2021. Mrs. Crowder was born on November 13, 1920 in Tignall Georgia to the late Lauren Wesley and Lulu Bobo Cooper. In addition to her parents,... View Obituary & Service Information

The family of Eloise Cooper Crowder created this Life Tributes page to make it easy to share your memories.

Send flowers to the Crowder family.