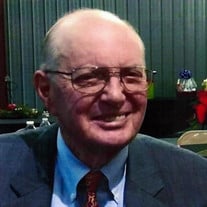 Pastor Harris Neil Fennell, age 86, of Clarkesville, Georgia, went to be with the Lord on Sunday, January 31, 2021. Pastor Fennell was born in Laurens County, Georgia, on March 16, 1934, to the late Thelmer and Ruby Fennell. In addition to... View Obituary & Service Information

The family of Pastor Harris Neil Fennell created this Life Tributes page to make it easy to share your memories.

Send flowers to the Fennell family.