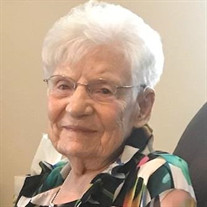 Funeral Services for Inez Andrews Cone, age 97, of Gainesville, Georgia, formerly of Perry, Florida and St. Simons Island, Georgia are planned for June 1, 2021, at Joe P. Burns Funeral Home in Madison, FL. Officiating will be Rev. Gene Stokes and Dr. Tony Lankford (Digitally). Mrs. Cone was preceded in death by her beloved husband, Alfred Cone, and devoted son, Ray Scott. She was born on July 29, 1923, in Lamont, FL to parents Zachary Taylor Andrews and Willie Gayle Andrews. Deceased siblings include: Agnes Jones, Frances Andrews, Sim Andrews, Henri Tuten and Beatrice Cone. Local survivors include her cherished daughter Donna C. Trotter (Mitchell) of Cornelia, GA, grandson, Brad Trotter (Carrie) and great-grandchildren, Jacob and Kate Trotter all of Demorest, GA. Out-of-town survivors include daughter-in-love, Sharon Scott of Brunswick, GA; as well as much loved grandchildren, Lance Scott (Susan) of San Jose, CA and Courtney (Mike) May of Wylie, TX; great-grandchildren, Sophia and Ava Scott of San Jose, and Cooper and Kent May also of Wylie. She is fondly remembered by numerous nieces and nephews. Friends and neighbors will remember Inez for her lovely, warm smile, gracious hospitality, and the energy she invested in her community. She was a member of the First Baptist Church of St. Simons Island, Worthy Grand Matron of the Order of the Eastern Star, where she held numerous offices over her lifetime, and also the Perry Garden Club where she was a repeat champion designer and flower show winner. She climbed the ranks to become a well-respected judge and traveled extensively to share her knowledge and expertise around the South. Inez and Alfred were avid gardeners whose delicious food landed on many Perry table tops and her culinary skills were enjoyed by family, friends and throngs of teenagers while they raised their family. Not only did she shine brightly as a homemaker and mother, Inez enjoyed a very successful career with Buckeye Cellulose Corporation where she was employed as the Company Plans Manager. As a graduate of Greenville High School, Inez was most proud of her accomplishments in the classroom and on the basketball court where she met her husband. In 2012, Inez moved to St. Simons Island, GA to be near her son. The Marshs Edge community welcomed her warmly and before long, Inez was involved in every aspect of retirement living. From a tap-dancing queen to the Miss July pin-up calendar girl, Inez's love of life and people were cornerstones for her Christian living values. She loved day trips, aquarobics, and the beautiful bridges and Marshes of Glynn County. Aunt ‘Nez, as she was fondly known, considered her calling to be making a difference in other people's lives. Her mission was to bring joy, comfort and happiness to those she encountered. She was in her element while helping others. Whether as an Ambassador at Marshs Edge or teaching Sunday School, Inez somehow managed to introduce an air of perfection into every undertaking. Only best efforts would satisfy her, and those ideals were instilled in countless others along the course of her life. In 2019, Inez once again made a fresh start taking residence at the Phoenix of Lake Lanier in Gainesville, GA. This move allowed her to be closer to her adoring daughter as Father Time began to walk with her. Inez and Donna reveled in their times together spending lazy afternoons giving manicures, playing beauty shop and going through old photos. They weathered the pandemic together, and Inez enjoyed extended visits at Donna's home seeing family and remembering days gone by. They sunned on the Phoenix patio together and shared window visits with the Trotter grandchildren. Both facility and private duty staff grew to love Inez's sweet smile and charming Southern ways. Her strong character reminded them to "close the door," and "say your prayers." A daily plethora of embraces, laughter, jokes and funny stories filled Room 309. The camaraderie was constant, quietened only by occasional long naps under watchful eyes. A few days prior to her passing, Inez acknowledged her life's work to be done, said her good-byes and climbed the stairway to Heaven from her home on May 27, 2021. Her life was long. Her light was strong. Services will be at the Joe P. Burns Funeral Home of Madison, FL on Tues., June 1, at 11:00 A.M. Visitation will be at the Funeral Home there at 10:00 A.M. prior to the Service which will be livestreamed on the Joe P Burns Facebook live page. Interment will follow in Greenville, FL at the Evergreen Cemetery. Floral tributes may be made or a monetary contribution may be made in Memory of Inez Cone to the Alzheimer’s Association, 225 N. Michigan Ave., Fl. 17, Chicago, IL 60601. Mrs. Cone's Tribute Video https://www.tributeslides.com/tributes/show/JL6DCMD82P3P4CLH Arrangements have been entrusted to the Whitfield Funeral Homes & Crematory, South Chapel at 1370 Industrial Boulevard, Baldwin, Georgia and Burns Funeral Home of Madison, 323 SE Lakeshore Drive, Madison, Florida.

The family of Inez Andrews Cone created this Life Tributes page to make it easy to share your memories.

Send flowers to the Cone family.