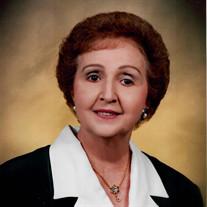 Jo Nell Glaze Barrett, age 83, of Demorest, Georgia went home to be with the Lord on Friday, October 1, 2021. Mrs. Barrett was born on February 26, 1938 in White County, Georgia to the late Lester C. and Nezzie Mae House Glaze . In addition to her parents, she was preceded in death by her husband, Hansel Barrett; her brothers, Vernon, Rondall, B.L., and A.J. Glaze; and her sisters, Arlene Lane, Ruby Cantrell London, and Everene Glaze Tomlin. Mrs. Barrett was Valedictorian of White County High School Class of 1954. She was a member of Level Grove Baptist Church where she sang in the choir and had served as Sunday School Secretary. Mrs. Barrett was employed as medical transcriptionist for 40 years and was also employed with the CDC in Atlanta. Jo was a loving mother and grandmother, she was known to her grandchildren as "Mama Jo". Survivors include her son, Nick Beatty, of Ft. Myers, FL; daughter and son-in-law, Joan B. Tench and Ronnie Tench, of Demorest; brother, Jack Glaze, of Cleveland; one granddaughter and her spouse, Stefanie and John Abbott, of Demorest; and two great-grandsons, Jesse Abbott and Jacob Abbott, of Demorest; and numerous nieces and nephews. Funeral Services will be held at 3:00 p.m., Monday, October 4, 2021 at the Whitfield Funeral Home, North Chapel with Rev. Ronnie Glaze officiating. Interment will follow in Level Grove Cemetery. The family will receive friends from 5:00 p.m. to 8:00 p.m., Sunday, October 3, 2021 at the funeral home. Flowers will be accepted or memorials may be made in Mrs. Barrett's Memory to Gideon's International, P.O. Box 295, Baldwin, Georgia 30511. Arrangements have been entrusted to the Whitfield Funeral Homes & Crematory, North Chapel at 245 Central Avenue, Demorest, Georgia 30535. Telephone: 706-778-1700.

The family of Jo Nell Glaze Barrett created this Life Tributes page to make it easy to share your memories.

Send flowers to the Barrett family.