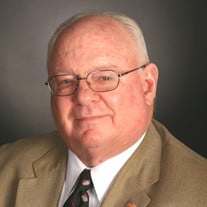 Kenneth David Kerby, age 74 of Cornelia, passed away Sunday, January 10, 2021 at Habersham Medical Center as a result of complications from COVID-19. A loving husband, father and grandfather, his first grandchild Josie named him Tess from a game they played together. Over the last 23 years, Tess is the name that his children, grandchildren and many others call him. Tess was a friendly, kind and funny man, a wealth of knowledge, who never met a stranger. He was a devoted husband and was looking forward to celebrating his 50th anniversary this year with the love of his life, Barbara. Over the years, he and Barbara welcomed dozens of their kids’ friends into their home, and Tess accumulated many “extra” children and grandchildren from all over the world, all of whom remember him fondly, especially those lucky enough to receive a special nickname. In his final year of life, Tess found great joy in taking his dog Bob to the Cornelia City Dog Park. The son of a U.S. Marine Corps Officer, Kenneth David was born April 13, 1946 in Washington DC, one of the first baby boomers. He lived his childhood years in various Marine Corps installations throughout the US, and spent his formative years in Northern Virginia, graduating from Yorktown High School in Arlington in 1964. Kenneth David attended the University of Georgia, graduating in 1969 with a degree in Agricultural Engineering (now Environment Engineering). He remained a devoted and passionate UGA Bulldog fan his entire adult life. After graduation, Kenneth went to work at Georgia Power Company where he worked as a Distribution Engineer until his retirement in 2005. He received his MBA from Brenau University in 1991. He is remembered by his colleagues for his quirky sense of humor and his willingness to mentor and support the career advancement of his coworkers. After his retirement, he and Barbara became active members of the Northeast Georgia Ambassadors of Georgia Power. David was a patriotic American with a strong sense of civic duty and a desire to contribute to his community. He served many years on the Habersham Medical Center Authority, including as Chairman. During a time of incredible growth, David was honored to steward the process to expand the medical center to its current capacity. He was also was a proud member of the Habersham Medical Center Foundation, and served on the Habersham County Zoning Commission and the City of Cornelia Board of Adjustments. A lifelong sports fan, he coached several recreational basketball and football teams, attended numerous Habersham Central Cheerleading competitions, and was a huge fan of North Georgia Aces Volleyball and Habersham Central Lady Raiders Volleyball. When they visited, Tess loved to take his grandsons anywhere, from boxing practice over two hours away in Atlanta to the Waffle House and especially to the gun range. He is survived by his loving wife of almost 50 years, Barbara Parks Kerby of Cornelia, his daughters Laura Kerby of Cornelia and Wynne Kerby Davis and husband Mike of the Netherlands. He leaves behind six grandchildren: Josie Brookshire-Fennell and her husband Zach of Clarkesville; Sydney Brookshire of Cornelia; Simon, Isaac Kerby, Maxwell and Georgia Davis of the Netherlands. His sisters Anne Kerby of Rocky River, OH and Katherine Kerby and husband Lane Ledbetter of Denver, CO also survive him. Tess married into the large, loud and bossy Parks Family, and he is survived by a number of much-loved Parks family members. In order for the people who meant the most to him to attend, a celebration of his life will be held at a later date. Memorials may be made in his honor to the Food Bank of Northeast Georgia’s Clayton location. Their website is https://foodbanknega.org/about/ or you may contact them at 706-782-0780. Arrangements have been entrusted to the Whitfield Funeral Homes & Crematory, South Chapel at 1370 Industrial Boulevard, Baldwin, Georgia 30511. Telephone: 706-778-7123

Kenneth David Kerby, age 74 of Cornelia, passed away Sunday, January 10, 2021 at Habersham Medical Center as a result of complications from COVID-19. A loving husband, father and grandfather, his first grandchild Josie named him Tess from a... View Obituary & Service Information

The family of Kenneth David Kerby created this Life Tributes page to make it easy to share your memories.

Send flowers to the Kerby family.