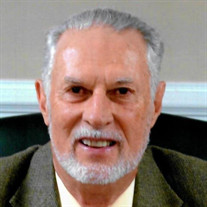 Malcolm Hunnicutt, of Demorest, Georgia passed away on Thursday, September 24, 2020. Mr. Hunnicutt was born on November 9, 1940 to the late Minor Marvin and Annie Pearl Nix Hunnicutt. In addition to his parents, he was preceded in death by his sisters, Doris Smith, Lucy Bowden; brothers, Mandle Hunnicutt, Horace Hunnicutt, Clois Hunnicutt, HC Hunnicutt, and Robert Hunnicutt. Mr. Hunnicutt was a member of the Demorest Baptist Church where he enjoyed singing in the choir. He was a graduate of Piedmont College and a United States Army Veteran. Mr. Hunnicutt served as the Mayor of Demorest for 39 years. He demonstrated true servant leadership during his tenure as Mayor and worked tirelessly to help the citizens of the citiy, especially those that were elderly or less fortunate. He was influencial in establishing the Demorest Water System throughout the rural areas of Habersham County. In 2014 he was awarded the Lifetime Service Award from the Georgia Municipal Association. Mr. Hunnicutt created life long bonds with those that knew him and impacted the lives of many people. He taught school and coached youth leagues for many years where he made lasting impressions on those he taught and coached. He was an avid golfer who loved the Georgia Bulldogs and the Atlanta Braves. Most of all, he enjoyed spending time with his family, especially his sons and grandchildren. Survivors include his loving wife of 53 years, Gwinn Wilbanks Hunnicutt, of Demorest; sons and daughters-in-law, Clete and Leigh Hunnicutt, of Clarkesville; Kip and Lisa Hunnicutt, of Cornelia; grandchildren, Mason Hunnicutt, Owen Hunnicutt, Emmy Lou Hunnicutt, Sunni Brett, Mary Kate Brett, and J Brown; sisters, Brenda Broome, of Commerce; and Lois Martin, of Clarkesville; and several neices and nephews. The family would like to extend their sincere gratitude to Jody Taylor, caregiver, and Amedisys Hospice for the excellent care they provided to Mr. Hunnicutt. Funeral Services will be held at 3:00 p.m., Saturday, September 26, 2020 at the Whitfield Funeral Home, North Chapel with Rev. Tyler Creel officiating. Interment will follow in Yonah Memorial Gardens. The family will receive friends from 12:00 p.m. to 2:45 p.m., Saturday, September 26, 2020 at the funeral home prior to the service at the funeral home. Flowers will be accepted or memorial donations may be made to St. Jude's Children's Research Hospital. Arrangements have been entrusted to the Whitfield Funeral Homes & Crematory, North Chapel at 245 Central Avenue, Demorest, Georgia 30535. Telephone: 706-778-1700.

Malcolm Hunnicutt, of Demorest, Georgia passed away on Thursday, September 24, 2020. Mr. Hunnicutt was born on November 9, 1940 to the late Minor Marvin and Annie Pearl Nix Hunnicutt. In addition to his parents, he was preceded in death by... View Obituary & Service Information

The family of Malcolm Hunnicutt created this Life Tributes page to make it easy to share your memories.

Malcolm Hunnicutt, of Demorest, Georgia passed away on Thursday,...

Send flowers to the Hunnicutt family.