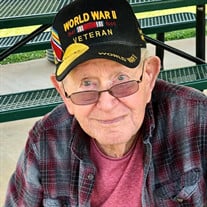 Powell Garlin Caudell, Jr., known to family and friends as P.G., died peacefully, surrounded by family and caregivers on Sunday, April 3, 2022. He was 96 years old. P.G. was born on June 26, 1925, in Baldwin, GA. He was the son of the late Powell Caudell, Sr. and Gladys Bell Caudell. He had seven brothers and sisters. He was married to the late Ruby Grace Roberson Caudell for 61 years. P.G. is survived by his three daughters, Carolyn Tieger (wife of Elliott Brown) of Naples, FL, Debbie Hope (wife of Josh) of Gainesville, GA and Kathy Cobb (wife of David) of Alto, GA. He leaves four grandchildren, Tarra Turner (Derrick), Rori Disla, Hunter Whitlock (Bonnie) and Cameron Whitlock (Dasha), and four great grandchildren Gage Turner (Abigail), Symone Turner, Cain Smith, and Rhys Whitlock. At the young age of 17, P.G. volunteered to serve his country in World War II. He was a Seaman First Class in the U.S. Navy and served aboard the USS Adair, APA 91. The vessel transported assault troops and supplies to various areas of combat throughout the Pacific, including the Philippines, Luzon, and Leyte. P.G. served as a gunner on the landing crafts that brought the troops, equipment, and supplies to shore. He proudly served from 1943 to 1946 and was honorably discharged. Throughout the years he organized and chaired an annual reunion for his shipmates in Pigeon Forge, TN. P.G. loved music and enjoyed singing. He and his daughters sang for years as a trio at dozens of singing conventions throughout the Southeast and later as a duet at funerals throughout the state of Georgia. He was a member of the Damascus Baptist Church for almost 70 years, where he served as choir director, clerk, and cemetery oversight for more than 40 years. After the original church was moved to Homer, P.G. moved his membership to Baldwin Baptist Church where he is currently a member. A graduate of Perry Business College, P.G. was a farmer and worked as a supervisor at Chicopee Manufacturing in Cornelia, GA for approximately 30 years. P.G. had many interests and hobbies, including woodworking, furniture design and construction, gardening, singing, raising show cattle with his grandson, NASCAR, politics, and football, especially his beloved Georgia Bulldogs. He was also known for a wicked sense of humor. Always a family man first, he supported his three girls in everything they did and taught them they could be or achieve anything they wanted. From instilling strong values of hard work, integrity, and leadership to supporting their education to seeing them through family crises and their many personal and professional endeavors, he was always there with a helping and guiding hand. P.G. was well-known in Grady community and Banks County, serving for several years as a volunteer fireman. When he passed, he truly was the last man standing. He was the last of his shipmates, the last sibling in his family, and one of the oldest in his community. He will remain, however, in the hearts of his family and friends as a loving, courageous, and supportive man who always stood tall…and always will…in their eyes. Funeral Services will be held 2:00 p.m., Thursday, April 7, 2022 at the Whitfield Funeral Home, South Chapel with Rev. Terry Rice officiating. Interment will follow in the Damascus Baptist Church Cemetery with Military Honors provided by the United States Navy and The Grant Reeves Honor Guard. The service will be livestreamed at the link below. https://fb.watch/cg3D1IzRmY/ The family will receive friends from 6:00 p.m. to 8:00 p.m. Wednesday and 12:30 p.m. to 1:30 p.m. Thursday at the funeral home. Arrangements have been entrusted to the Whitfield Funeral Homes & Crematory, South Chapel at 1370 Industrial Boulevard, Baldwin, Georgia 30511. Telephone: 706-778-7123.

Powell Garlin Caudell, Jr., known to family and friends as P.G., died peacefully, surrounded by family and caregivers on Sunday, April 3, 2022. He was 96 years old. P.G. was born on June 26, 1925, in Baldwin, GA. He was the son of the late... View Obituary & Service Information

The family of Powell "P.G." Garlin Caudell Jr created this Life Tributes page to make it easy to share your memories.

Send flowers to the Caudell family.