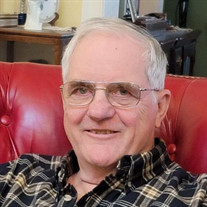 Thomas "Tommy" Dodgen, age 76, of Clarkesville, Georgia went home to be with the Lord on Monday, January 25, 2021. Mr. Dodgen was born on February 10, 1944 in Baltimore, Maryland to the late Fred Lee and Rosa Mae Ogle Dodgen. In addition to his parents, he was preceded in death by his brothers, Fred Lee Dodgen, Jr., James Luther Dodgen; sister, Carolyn Hogsed. Tommy was known to his family as Dad, Pop, and their Boy Scout as he was always prepared for everything. Tommy joined the police force in the City of Atlanta straight out of high school. He was drafted into the United States Army serving in Vietnam. Upon returning home he went back to work policing. He retired in 1992 and began working private security around the Federal Buildings in downtown Atlanta. Tommy retired in 2010 when he and his wife, Ginger found their mountain retirement home. Tommy was a member of the Mt. Carmel Baptist Church in Demorest where he served as a Deacon. After retirement, Tommy loved to devote time to volunteer work including serving at Habersham Soup Kitchen in Clarkesville and the Meals on Wheels Program through the Senior Center. Tommy was a devoted husband, father, grandfather, and great-grandfather and he loved to spend time with all of his family. Everyone that knew Tommy knew that he never met a stranger. He was a loving friend to all. Survivors include his loving wife of nearly 53 years, Ginger Smith Dodgen, of Clarkesville; daughter and son-in-law, Darlene and Ted Smith, of Clarkesville; son and daughter-in-law, Randy and Brandi Dodgen, of Clarkesville; grandchildren, Ted Smith, Jr., Makayla Allen and Josh, Matt Shepherd and Amber, Kelley Shepherd, Lauren Pittman and Nick; honorary grandson, Dylan Harris; great-grandchildren, Addy, Savannah, Ashtin, Little Jack, Jayden, Trycen, Kasen, Kash, Lyla Belle; sister and brother-in-law, Regina Horadan and Eric; sister, Helen Hilsman; sister-in-law, Hilda Dodgen; numerous nieces, nephews, and their families. Due to the current concerns with COVID-19, Private Graveside Services will be held. A livestream of the service will be available at 1:00 p.m., Thursday, January 28, 2021 at facebook.com/whitfieldfh. In lieu of flowers, memorial donations may be made in memory of Tommy to the Future Growth Fund of Mt. Carmel Baptist Church. Arrangements have been entrusted to the Whitfield Funeral Homes & Crematory, North Chapel at 245 Central Avenue, Demorest, Georgia 30535. Telephone: 706-778-1700.

Thomas "Tommy" Dodgen, age 76, of Clarkesville, Georgia went home to be with the Lord on Monday, January 25, 2021. Mr. Dodgen was born on February 10, 1944 in Baltimore, Maryland to the late Fred Lee and Rosa Mae Ogle Dodgen. In addition to... View Obituary & Service Information

The family of Thomas "Tommy" Dodgen created this Life Tributes page to make it easy to share your memories.

Send flowers to the Dodgen family.