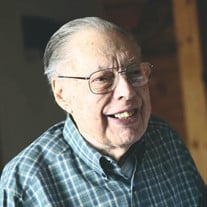 Walter Olly Teague, Jr, age 93, of Clarkesville, Georgia, formerly of East Atlanta, went to be with the Lord on Friday, December 24, 2021. Mr. Teague was born on August 18, 1928, in Atlanta, Georgia. He and his sister, Joyce Brown of McDonough, Georgia were raised in East Atlanta. He was preceded in death by a son-in-law, Karl Schlieman and great-grandchild, Aspen Teague Kleinschmidt. Walter was a veteran of the U.S. Army. After leaving the service, he met his wife of sixty-seven years, Patricia Helen Hamilton. They started their life together in Dekalb County, Georgia, later moving to Snellville, Georgia to raise their family. After Walter retired from Rockwell International and Pat from Lee Laboratories, they built their cabin in the woods outside Clarkesville, Georgia, where they lived for twenty-six years. He was a member of the Snellville United Methodist Church, and after moving to Habersham County, Clarkesville First United Methodist Church. Walter was a member of the Civitan Organization and a long-time blood donor with the American Red Cross. He loved to travel, camp, hunt, and fish with his family. He also loved the Dallas Cowboys. Walter and Pat have three children, Pam Schlieman Paine (Neil), Tim Teague (Shari) and Jill Kleinschmidt. They enjoy time with their grandchildren Josh Schlieman (Crystal), Stephanie Holcomb, Tim Teague (Jessica), Megan Teague, Austin Schlieman (Caitlyn), Wrenn Kleinschmidt, Collin Kleinschmidt and Alyse Kleinschmidt, and their seven great-grandchildren. Graveside Services will be held at 3:00 p.m., Tuesday, December 28, 2021, at the Yonah Memorial Gardens with Pastor Keith Cox and Rev. Phil DeMore officiating. The family will receive friends on Tuesday, December 28, 2021 from 1:00 p.m. to 2:40 p.m., at the Whitfield Funeral Home, North Chapel of Demorest. Arrangements are entrusted to the Whitfield Funeral Home and Crematory, North Chapel, at 245 Central Avenue, Demorest, Georgia 30535. Telephone: 706-778-1700.

Walter Olly Teague, Jr, age 93, of Clarkesville, Georgia, formerly of East Atlanta, went to be with the Lord on Friday, December 24, 2021. Mr. Teague was born on August 18, 1928, in Atlanta, Georgia. He and his sister, Joyce Brown of McDonough,... View Obituary & Service Information

The family of Walter Olly Teague, Jr. created this Life Tributes page to make it easy to share your memories.