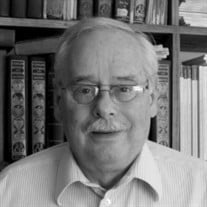 David Louis Greene (Ph.D., F.A.S.G.) passed away on November 20, 2020 after a period of declining health. The son of Rev. George Louis Greene and Margaret Elsie Chindahl Greene, he was born September 24, 1944 in Middletown, CT. The family lived in Connecticut and Illinois before moving to Florida. David received a B.A. from the University of South FL, and a M.A. and Ph.D. from the University of Pennsylvania. He and his twin brother Douglas were both Woodrow Wilson Scholars. After graduation, he became a professor of English at Piedmont College in Demorest, GA where he taught for 37 years and retired as Professor Emeritus. During his tenure there, he served as chair of English Department and also helped to start a literary magazine, The Habersham Review. After a childhood fascination with the novels by L. Frank Baum (The Wizard of Oz), he helped found the International Wizard of Oz Club in 1957, and edited its journal, The Baum Bugle, for several years. He is the author of several articles about L. Frank Baum and is also the author of The Oz Scrapbook. A passion for genealogy that began in graduate school, led to a lifetime of scholarly research including many articles and books. He was the editor of The American Genealogist for 25 years and a Fellow of the American Society of Genealogists. David was particularly well known for several articles on the genealogy of Salem Witches. He was also a member of the American Antiquarian Society and the Colonial Society of MA. David was a member of Grace Calvary Episcopal Church in Clarkesville, GA where he led the restoration of the Henry Erben organ, was working on a history of the church, and was a longtime choir member. David is survived by his wife, Amelia Jane McFerrin, of Cleveland, GA, daughter, Jennifer Helen Greene-Rooks (Lynn), son, Christopher Douglas Greene (Amy), stepdaughters, Elizabeth Johnson Epps (Richard) and Laura Christine Wickiser (William), twin brother, Douglas George Greene (Sandi), brother Paul Eric Greene (Cynthia), and 5 grandchildren. He will long be remembered for his warmth, his wit, his kindness, his intelligence, and his love. Due to the current COVID situation, a memorial service will be held at a later date. The family requests any contributions be made to Grace Calvary Episcopal Church, Clarkesville, GA. Arrangements have been entrusted to the Whitfield Funeral Homes & Crematory, North Chapel at 245 Central Avenue, Demorest, Georgia 30535. Telephone: 706-778-1700.

David Louis Greene (Ph.D., F.A.S.G.) passed away on November 20, 2020 after a period of declining health. The son of Rev. George Louis Greene and Margaret Elsie Chindahl Greene, he was born September 24, 1944 in Middletown, CT. The family... View Obituary & Service Information

The family of Dr. David Louis Greene Ph.D. created this Life Tributes page to make it easy to share your memories.

Send flowers to the Greene family.