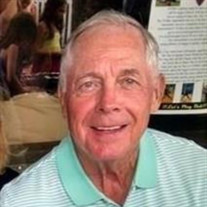 Donald Burrell Blackburn, Sr., age 81 of Macon, Georgia passed away Sunday, September 19, 2021. Don was born September 2, 1940 in Cornelia, Georgia to Busee (Burrell) and Waymon Blackburn. He grew up in Oakdale and attended Fitzhugh Lee Elementary and Campbell of Smyrna High School where he excelled in football, basketball and baseball serving as captain for all three sports. Don, being highly recruited as an All-American quarterback, signed a scholarship to play football at the University of Georgia. He was known to his teammates as “Blackie” and wore #28. While in Athens, he met and married Janet Vaske, his wife of 59 years. In 1969, Don & Janet moved to Macon for Don to continue his career with Sylvania Electric. He would go on to form and run his own company, Don Blackburn & Associates until he retired in 2005. He was a member of First Presbyterian Church where he served as an elder and chairman of the mission committee for many years. Don also served on denominational committees for Mission to the World and the PCA Foundation. He had a sincere heart for missions and dedicated time and resources to many projects in Africa and Haiti. Don served on the boards of El Shaddai and African Bible Colleges. He also served as chairman of the board of First Presbyterian Day School, where his children and several grandchildren attended. Don was an avid golfer and enjoyed playing “a lot” with his golfing buddies. He served as president of Riverside Country Club and maintained memberships at Idle Hour Country Club, the Brickyard, and Brunswick Country Club. After retirement, Don enjoyed attending monthly meetings with DaBoys of Campbell group, which enabled him to renew many of the relationships from his high school days. He is survived by his wife, Janet (Macon), daughter Lori (Tim) Harden of St. Simons Island, son Donnie (Pam) Blackburn of Sandy Springs, and daughter Natalie (Todd) Hunt of Macon. Grandchildren Rachel Harden (Jordan) Warhurst of Marietta, Taylor Harden of New York City, N.Y., Jacob & Jessica Blackburn of Sandy Springs and Laine, Nathan, Holly and Emily Hunt of Macon and Great Granddaughter, Lillie Joy Warhurst. Siblings, Shelba (Dean) Jones of Clarkesville, John (Connie) Blackburn of Lawrenceville, Denise (Don) Bluster of Clarkesville, and sister-in-law, Fran Blackburn of Jefferson and many nieces and nephews. He is preceded in death by his father and mother and older brother, James Waymon Blackburn and grandson, Benjamin Harden. Graveside services will be held at 2:00 PM Thursday, September 23rd at B.C. Grant Baptist Church in Alto, Georgia. A Celebration of Life Service will be held Friday, September 24th at First Presbyterian Church, Macon, Georgia at 11:00 AM. The family will greet friends following the service. In lieu of flowers, donations can be made to First Presbyterian Church, Macon, Georgia, “Haiti Relief.” Services may be viewed livestream by visiting www.fpcmacon.org and clicking “Join us Live” on the home page. Visit www.snowsmacon.com to express tributes. Snow’s Memorial Chapel, Bass Road, has charge of arrangements. Courtesy Announcement by Whitfield Funeral Homes & Crematory of Habersham County, Georgia. 706-778-7123 / 706-778-1700

The family of Donald Burrell Blackburn Sr.(Courtesy) created this Life Tributes page to make it easy to share your memories.

Send flowers to the Blackburn family.