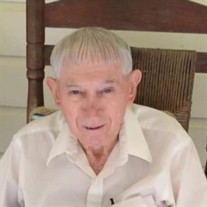 Howard "Bud" Turner, age 88, of the Rock Springs Community in Lula, Georgia passed away on Saturday, January 23, 2021. Mr. Turner was born on May 16, 1932 to the late W.F. and Floyce Chambers Turner. In addition to his parents, he was preceded in death by his loving wife, Elizabeth Ward Turner; and sister, Mary Ruth Dill. Mr. Turner was retired from the Habersham Metal Products with 45 years of service. He was a United States Army Veteran having served during the Korean Conflict. He earned a Bachelor of Arts Degree from Piedmont College on the GI Bill. After retirement he enjoyed farming, working with his cows and spending time on his KUBOTA tractor. Howard loved to spend time with his grandchildren and great-grandchildren, and was known as "Little Papa". Survivors include his daughters and sons-in-law, Beverley and George Tuggle, of Emmitsburg, MD; Sandra and Tim Garner, of the Rocks Springs Community; Doris and Kim Cantrell, of Mt. Airy; Angela and Blaine Tarnecki, of the Rock Springs Community; sister, Evelyn Fowler, of Demorest; grandchildren, Rebecca Landreth, of Wyndmoor, PA; Faith Tuggle, of Hagerstown, MD; and April Tuggle, of Carlisle, PA; Anna Prance, of Canton; Kara Martin, Will Tarnecki, and Mary Beth Tarnecki, all of the Rock Springs Community; Brooke Cantrell, Dylan Cantrell, and Jonah Cantrell, all of Mt. Airy; great-grandchildren, Rylee, Henry, Bennett, Eli, David, Emma; and numerous nieces and nephews. Funeral Services will be held at 11:00 a.m., Tuesday, January 26, 2021 at the Whitfield Funeral Home, South Chapel with Pastor Blaine Tarnecki officating. Interment will follow in the Rock Springs Baptist Church Cemetery. The family will receive friends from 2:00 p.m. to 4:00 p.m. and from 6:00 p.m. to 8:00 p.m., Monday, January 25, 2021 at the funeral home. Mr. Turner's funeral service https://fb.watch/3g5TlUal9h/ Arrangements have been entrusted to the Whitfield Funeral Homes & Crematory, South Chapel at 1370 Industrial Boulevard, Baldwin, Georgia 30511. Telephone: 706-778-7123.

Howard "Bud" Turner, age 88, of the Rock Springs Community in Lula, Georgia passed away on Saturday, January 23, 2021. Mr. Turner was born on May 16, 1932 to the late W.F. and Floyce Chambers Turner. In addition to his parents, he was preceded... View Obituary & Service Information

The family of Howard "Bud" Turner created this Life Tributes page to make it easy to share your memories.

Howard &quot;Bud&quot; Turner, age 88, of the Rock Springs Community in...

Send flowers to the Turner family.