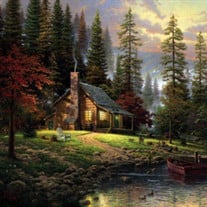 William Clifford "Bill" Anderson, age 92, of Clarkesville, Georgia passed away on Thursday, April 22, 2021 surrounded by his children. Mr. Anderson was born on January 17, 1929 in Habersham County, Georgia to the late Henry and Leona Trotter Anderson. In addition to his parents, he was preceded in death by his loving wife of 66 years, Ruth Stamey Anderson; sisters Doris Taylor, Mildred Ellison, Ruth McAllister and a brother Homer Anderson. Mr. Anderson lived almost all of his life in Habersham County, with the exception of three years of military service in the Army Air Corps and United States Air Force. He was a life long member of Bethlehem Baptist Church. Mr. Anderson was retired from Scovill Manufacturing with more than 35 years of service. Mr. Anderson is survived by his son, Clifford Daniel "Dan" Anderson of Lincoln, Nebraska; son and daughter-in-law, Jeff and Leesa Anderson; daughter and son-in-law, Teresa Anderson Franklin and Phillip all of Clarkesville; daughter and son-in-law, Edwina Anderson Houghton and Charles of Duluth; sister, Evelyn Dockery of Cornelia; ten grandchildren; nine great-grandchildren; and numerous nieces and nephews. Bill loved his wife, children, grandchildren, and growing things such as grapes, apples, blueberries, and garden vegtables. He loved working outside, and was still cutting his own grass and taking a daily walk at age 92. Graveside Services will be held at 1:00 p.m., Monday, April 26, 2021 at the Bethlehem Baptist Church Cemetery in Clarkesville. In lieu of flowers, memorials may be made in Mr. Anderson's memory to Bethlehem Baptist Church or the charity of one's choice. Arrangements have been entrusted to the Whitfield Funeral Homes & Crematory, North Chapel at 245 Central Avenue, Demorest, Georgia 30535. Telephone: 706-778-1700.

The family of William Clifford "Bill" Anderson created this Life Tributes page to make it easy to share your memories.

Send flowers to the Anderson family.