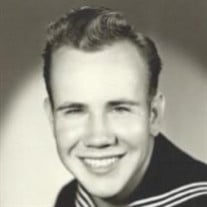 Bobby Ray Stone (CWO4, USCG-R), age 90, passed from this life on October 17, 2020 in his home in Alto, Georgia. Mr. Stone was born in Ayersville, GA, on June 11, 1930, a son of the late William Freeman Stone and Annie Loyce Fulghum Stone. He grew up in Bellton/Lula and went to Lula School. He enlisted in the United States Navy in 1948 and served aboard the USS Jason during the Korean war. Afterwards, he made his home in Charleston, South Carolina, where he worked for the Charleston Naval Shipyard until he retired in 1987. Bobby became a “plank owner” in the newly established U.S. Coast Guard Reserve unit at the foot of Tradd Street, where he served for over thirty years. Being a veteran was very important to him. His life revolved around his faith in God, family, friends, and love of country. During his career at the shipyard and in the Coast Guard, he was given several awards through the years, including an award by the late President, Georgie H. W. Bush for service to his country and specifically for developing a Coast Guard security plan for the Port of Charleston, SC. All his adult life, he held leadership positions in the churches to which belonged in Charleston, S.C., and northeast Georgia. He was a member of Cornelia United Methodist Church and attended regularly as he was able until a few years ago. In addition to his parents, Bob is preceded in death by his first wife, Syble Davidson Stone, their son Rev. Stanley W. Stone, and brother William Freeman Stone, Jr. Bob is survived by his wife of forty-four years, Theresa (“Terry”) Stone, his daughter, Doris S. Carr (Lands), daughter-in-law Nancy F. Stone, sisters Patricia Ann Stone Wade (Marlin) and Joyce Stone McNish, grandchildren, Rev. Peter Davidson Stone (Morgan), Christopher Waring Stone, and Callie Elizabeth Stone, and his beloved cocker spaniels Rocky and RJ. He is also survived by sister-in-law, Louise Davidson Jordan (Howard), and several nieces, nephews, and cousins. He will be remembered by his family and many friends for his engaging smile, hearty laughter, and his entertaining stories. The family is very grateful to a number of people, who have shown love and support throughout these past few months. Visiting Angels, a loving organization of caregivers sent us Debbie Kerkhoff, who has travelled this road with us since April. Other angels have come to help too. Also, Hospice provided wonderful care and saw him through his last days. Without question, Dr. Joshua Garrett has cared for him with tenderness and understanding. Dr. Robert Bruner, our dentist, always loved for Bob to come in and tell his stories. Both Dr. Garrett and Dr. Bruner took care of him in his needs in the last weeks. A Graveside Service will be held at 3:00 p.m., Saturday, October 24, in Yonah Congregational Holiness Church Cemetery in Alto, Georgia with military honors provided by the United States Navy and the Grant-Reeves Honor Guard. Due to COVID-19 Please observe social distancing procedures. Masks are respectfully required. Arrangements have been entrusted to the Whitfield Funeral Homes & Crematory, South Chapel at 1370 Industrial Boulevard, Baldwin, Georgia 30511. Telephone: 706-778-7123

The family of Bobby Ray Stone created this Life Tributes page to make it easy to share your memories.

Send flowers to the Stone family.