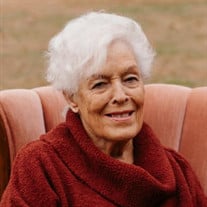 Doris Hanes Brock, age 92, of Cornelia, Georgia passed away on Monday, June 7, 2021. Mrs. Brock was born on January 15, 1929 in Fulton County, Georgia to the late Wade L. and Della Reeves Hanes. In addition to her parents, she was preceded in death by her first husband and the love of her life, Waller W. "Jack" Calmes; she was also preceded in death by her second husband, Lt. Col Alton Carr Brock; and her two brothers, that she was very close with, Jack Hanes and Wade Hanes. Mrs. Brock was a lady that lived a full life from her days as a cheerleader for Forest Park Highschool to serving as Sunday School Superintendent for many years at Cornelia United Methodist Church. When Doris was young she told Western Union in Atlanta that she was older so she could deliver telegrams on foot. She later became associated with Riches Macy's where she worked cosmetics, handbags, luggage, jewelry, hosiery, and accessories; she also modeled runway and editorial for Riches Macy's. Doris and her first husband, Jack were the successful owners and operators of Georgia Coach and Campers. She was also the owner of several rental properties and churches around Atlanta. Doris was always into something, she was very much a carefree spirit and adventurous person. She had much success and many achievements but her greatest joy was her family, she was a devoted wife, mother, grandmother, sister, aunt and friend; always providing for those she cared about. Doris had a great sense of humor and was known for her sarcastic quick-wit. Later in life Doris, enjoyed being outdoors, spending time hunting, fishing, shooting, or just on the houseboat at Lake Lanier with her friends. She also enjoyed shopping, dancing, eating anything sweet, or "goodies" as she referred to them, and she also enjoyed spending time with her cats and her family. Survivors include her daughter and her boyfriend, Lauren Drake Spratlin and Christopher Jones; step-daughter and her husband, Sharon Westmoreland and David; step-grandson and his wife, Adam Westmoreland and Abigail; step-great-grandchildren, Aleigha Jones and Elijah Westmoreland; niece and her boyfriend, Elizabeth "Libby" Hanes and Clarence Way; nephew, Steve Hanes and his family; great-nieces, Laurie Ann Spratlin; Rhonda Russo and family; great-great niece, Deacon Robinson. Funeral Services to honor Doris' life will be held at 11:00 a.m., Saturday, June 12, 2021 at Cornelia United Methodist Church. Interment will follow at the Jones Memorial Cemetery in Forrest Park, Georgia where she will be laid to rest by her first husband, Jack. The family will receive friends from 6:00 p.m. to 9:00 p.m., Friday, June 11, 2021 at the Whitfield Funeral Home, North Chapel. Arrangements have been entrusted to the Whitfield Funeral Homes & Crematory, North Chapel at 245 Central Avenue, Demorest, Georgia 30511. Telephone: 706-778-1700.

Doris Hanes Brock, age 92, of Cornelia, Georgia passed away on Monday, June 7, 2021. Mrs. Brock was born on January 15, 1929 in Fulton County, Georgia to the late Wade L. and Della Reeves Hanes. In addition to her parents, she was preceded... View Obituary & Service Information

The family of Doris Hanes Brock created this Life Tributes page to make it easy to share your memories.

Doris Hanes Brock, age 92, of Cornelia, Georgia passed away on...

Send flowers to the Brock family.