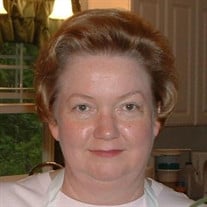 A Memorial Service will be held for Susan King Watson, age 70, of Demorest, at Whitefield Funeral Home, North Chapel on Saturday, April 17 at 3:00 p.m. with Dr. Bryan Cribb, Dr. Tom Mewborn, and Rev. Tom Turner officiating. The family will receive friends from 1:00 p.m. to 2:45 p.m., on Saturday, April 17, 2021 prior to the service. Susan passed away peacefully in her sleep on Wednesday, April 14 after suffering heart failure. She was born in Habersham County on April 9, 1951 to the late Ernest Lee King and Helen Thomason King. In addition to her parents, she was preceded in death by her sisters Sylvia King Bowen and Louise King Williams. She was a member of New Prospect Baptist Church, Anderson, SC where her husband serves a Minister of Music. She is a former member of Demorest Baptist Church. She graduated South Habersham High School, Class of ‘69 and attended Piedmont College. She was a dedicated Christian wife who served faithfully with her husband in churches in Florida, Georgia and South Carolina and will always be remembered for her compassionate heart, fun-loving spirit, and her love for her Savior. She lived with her family in Anderson, SC for 31 years before returning with her husband to Demorest in 2006. She was a proud mother and grandmother whose greatest joy was her daughters and granddaughters, whom she loved with all her heart. Susan had a passion for traveling and for over 15 years she and her husband operated Bobby’s Discovery Tours, which later became Daniel’s Discovery Tours. She also loved her flowers and during the summer almost daily would post the newest bloom on Instagram for her daughter and granddaughters to see. Susan is survived by her husband of 49 years, Robert W. (Bobby) Watson, Jr.; daughter, April Dawn Watson of Erwin, Tennessee; daughter, Robin Watson Moser and son-in-law, Jason, and granddaughters Hannah Susan and Ainsley Helen Moser of Fairfax Station, Virginia. She is also survived by her sister Judy King Wyke, and brother-in-law, Bill of North Carolina; brother Ernest Lee King, Jr. and sister-in-law, Dot of Hartwell, Georgia; and brothers-in-law, Howard Williams and Bill Bowen. She is also survived by nieces Sheila and Shannon Williams and Beth Bowen Grimes; and nephews Dean and Ben Bowen, Judd Wyke, and John and Andrew King. In lieu of flowers the family suggest a donation in Susan’s memory to New Prospect Baptist Church, 2503 Whitehall Road, Anderson, SC 29625 or Demorest Baptist Church 755 Central Ave. Demorest, GA 30535. Mrs. Watson's Funeral Service https://fb.watch/4ZgxChJUvn/ Arrangements have been entrusted to Whitfield Funeral Homes and Crematory, North Chapel at 245 Central Avenue, Demorest, Georgia 30535. Telephone: 706-778-1700.

The family of Susan King Watson created this Life Tributes page to make it easy to share your memories.

A Memorial Service will be held for Susan King Watson, age 70,...

Send flowers to the Watson family.