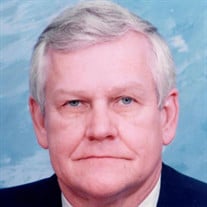 Edwin Carter Stewart, of Baldwin, Georgia passed away peacefully at home following an extended illness on Sunday, July 11, 2021, at the age of 78. Carter was born at home on May 24, 1943 in Banks County, Georgia to the late William Stewart and Inez Chitwood Stewart. He graduated from South Habersham High School in 1961. Carter became the first college graduate in the family when graduated from the University of Georgia as a scholarship recipient from baseball legend Ty Cobb, his mother’s 1st cousin. He taught high school history for a few years before returning to UGA for a degree from its School of Pharmacy. He worked as a pharmacist at Commerce Drug in Commerce, Georgia before opening his own pharmacy, Homer Drug in Homer, Georgia where he was devoted to his work and cherished his daily interactions with customers. As the only pharmacy in Banks County for many years, this store and its owner with the out-sized personality held a prominent place in the community. A truly memorable character, Carter never forgot a name or a face, and he loved to regale his listeners with stories and memories from the past. One always knew where Carter stood on any issue, as he was quick to share his opinion and perspective. He was a great storyteller who had a witty and impressive comeback in almost any conversation. Carter remained a handsome man even in his later years, with a head full of hair and striking blue eyes. Carter also enjoyed making concrete pottery at his pottery business, Stewart Pottery, in Banks County. Retirement from the pharmacy business didn’t slow down his entrepreneurial drive, as he continued to buy and sell cars and dabble in other business ventures. He was known in every local restaurant as the man who liked his steak cooked well done and always brought his own beverage. Carter was proud of his family and loved them deeply. He will be greatly missed by friends, family, and all who knew him. One of his greatest joys was when his grandchildren would attend church with him and then lunch afterwards, so he could show them off. He was truly one of a kind. He is survived by his loving and devoted wife of 36 years, Nancy Tanner Stewart, son Steven Stewart and daughter Lee Ann Turner; and four grandchildren: Mary-Carter Stewart, Jim Stewart, Taylor Turner, Emilee Turner and great-granddaughter, Sawyer Baker. Additional survivors include his step-son, Kenneth Ott (Jennifer), and step-grandchildren Cory Ott and Noah Ott. The Stewart family wishes to extend a special thank you to his nurse, Amy Upchurch of Pruitt Health Hospice and caregivers, Mekia and Roderick Gordon. Funeral Services will be held at 2:00 p.m., Thursday, July 15, 2021 at the First Baptist Church of Cornelia with Rev. Jimmy Lewis and Pastor David Terrell officiating. Interment will follow in the Tates Creek Baptist Church Cemetery. The family will receive friends from 5:00 p.m. to 7:00 p.m., Wednesday, July 14, 2021 at Whitfield Funeral Home, South Chapel. Mr. Stewart's Funeral Service https://fb.watch/v/1SCbq-vnB/ Arrangements have been entrusted to the Whitfield Funeral Homes & Crematory, South Chapel at 1370 Industrial Boulevard, Baldwin, Georgia 30511. Telephone: 706-778-7123.

Edwin Carter Stewart, of Baldwin, Georgia passed away peacefully at home following an extended illness on Sunday, July 11, 2021, at the age of 78. Carter was born at home on May 24, 1943 in Banks County, Georgia to the late William Stewart... View Obituary & Service Information

The family of Carter Stewart created this Life Tributes page to make it easy to share your memories.

Send flowers to the Stewart family.