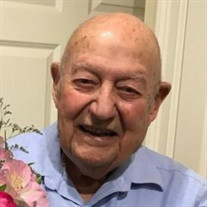 Dwight E. Cook, age 98, of Cornelia, Georgia passed away on Sunday, January 10, 2021. Mr. Cook was born December 18, 1922 in Benton, Illinois to the late Harry and Margaret Cook. In addition to his parents, he was preceded in death by his loving wife of 71 years, Mary Ann "Tich" Cook. In recent years, Mr. Cook was a member of Bethlehem Baptist Church, First Baptist Church of Gainesville and also the First Baptist Church of Cornelia. He loved his Lord Jesus Christ and served Him to the best of his ability. Lt. Colonel Dwight E. Cook was a United States Air Force Veteran, having voluntarily joined the World War II war efforts as a state-side pilot instructor. He trained bomber pilots, many who fought in Europe. He also served in the Ohio Air National Guard for 28 years. Whether his family, church, relationship with the Lord or his nation, Dwight stood tall as a man who never backed down in what he believed in. Grandson Jason Bouchard spoke of his grandfather saying “Grandpa was a stalwart of a man who loved the Lord and loved his family and country. He was known to his grandchildren as "Grandpa". Survivors include his daughter and son-in-law, Deborah and Robert Bouchard, of Cornelia; and their children, Jason Bouchard and his wife, Anna; Jennifer Pate and her husband, Joseph; daughter and son-in-law, Bonnie and Richard Fellows, of Louisville, KY; and their children, Jonathan Fellows and his wife Cindy; Rebecca Woods and her husband, Paul; son and daughter-in-law, David and Linda Cook, of Phoenix, AZ; and their son, Justin Cook and his wife, Nikki; daughter and son-in-law, Carol Ann and David Libbon, of Spotsylvania, VA; and their children, Rosanna Lonzo and her husband, Chris; Natalie McPherson, and her husband, Jake; Ryan Libbon; Sarah Libbon; great-grandchildren, Abigale, Westin, Madilyn, James, Michael, Daniel, Anneliese, Cady, Alana, Noah, Faith, Eli, and Andie . Funeral Services will be held at 2:00 p.m., Sunday, January 17, 2021 at the Whitfield Funeral Home, North Chapel with Rev. Steve Doran officiating. The family will receive friends from 5:00 p.m. to 8:00 p.m., Saturday, January 16, 2021 at the funeral home. In lieu of flowers, donations may be made to one of Mr Cook’s favorite ministry that serves orphans and widows located in Hyderabad, India. Donations can be made online by going to: www.chchurch, click the online giving button, To: World Missions and fill in the blanks. Be sure in the Note/Memo: to write: Faith Welfare Society, India Mr. Cook's funeral service https://fb.watch/3g63voiuCr/ Arrangements have been entrusted to the Whitfield Funeral Homes & Crematory, North Chapel at 245 Central Avenue, Demorest, Georgia 30535. Telephone: 706-778-1700

Dwight E. Cook, age 98, of Cornelia, Georgia passed away on Sunday, January 10, 2021. Mr. Cook was born December 18, 1922 in Benton, Illinois to the late Harry and Margaret Cook. In addition to his parents, he was preceded in death by his loving... View Obituary & Service Information

The family of Dwight E, Cook created this Life Tributes page to make it easy to share your memories.

Send flowers to the Cook family.