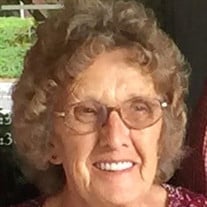 Frances Elizabeth Wilson, age 88, of Jefferson, Georgia formerly of The Batesville Community, Clarkesville, Georgia passed away on Monday, December 27, 2021. Mrs. Wilson was born on February 3, 1933 in Hiawassee, Georgia to the late Claude and Lola Shook Cowart. In addition to her parents, she was preceded in death by her loving husband of 63 years, Quinton Dwight Wilson; daughter, Pamela; son, Joey; brother, JC Cowart. Mrs. Wilson married Quinton in 1954, and spent the early years of their marriage as an Air Force Wife in Biloxi, Mississippi and then moved back to the Batesville Community where they spent over 50 years together. Mrs. Wilson was retired from Scovill Manufacturing Company with 33 years of faithful employment. She enjoyed her years of retirement, fulfilling her dream of visiting of all 50 states. She enjoyed traveling, crafting, gardening, and spending time with her family and friends, but most of all her seven grandchildren and twelve great-grandchildren who knew her lovingly as "Maw-Maw". Survivors include her son and daughter-in-law, Robin and Martha Wilson, of Jefferson; grandchildren, Brock Wilson, Drew Wilson, Parker Wilson, Carley Wilson, Meridee Rilen, Jarad Wilson, and Nathan Wilson; great-grandchildren, Makenzie, Wyatt, Dulaney, Ridley, Collins, Burch, Boone, Asher, Avric, Adley, Colin and Emma; brother and sister-in-law, Grady and Carolyn Cowart and many nieces, nephews, cousins, and friends. Funeral Services will be held at 3:00 p.m., Wednesday, December 29, 2021 at the Whitfield Funeral Home, North Chapel. Interment will follow in the Old Nacoochee Missionary Baptist Church Cemetery. The family will receive friends from 1:00 p.m. to 2:45 p.m., Wednesday, December 29, 2021 at the funeral home prior to the service. Arrangements have been entrusted to the Whitfield Funeral Homes & Crematory, North Chapel at 245 Central Avenue, Demorest, Georgia 30535. Telephone: 706-778-1700.

The family of Frances Elizabeth Wilson created this Life Tributes page to make it easy to share your memories.

Send flowers to the Wilson family.