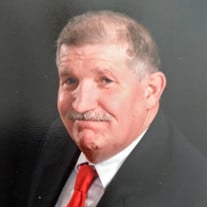 On Wednesday, September 29, 2021, Jack Lee Stewart, of Commerce, Georgia (Banks County), loving and adored husband, father, brother, and friend, passed away at the age of 71. Jack was born on June 14, 1950, in Austell, Georgia to Frank and Josephine Stewart. On July 20, 1970, he married his high school sweetheart, Peggy Espy. They have one son, Ricky. Jack attended Norcross High School and then joined the United States Navy in 1969. Upon his Honorable Discharge, Jack and Peggy settled in Norcross, GA and Jack began his 42-year career as a professional long-haul truck driver. Jack Stewart will be remembered as a friend to all, someone who never met a stranger. He was full of charisma, trustworthy, and a go-getter. In addition to his role as a long-haul driver, he was a successful salesperson for Texas Refinery Oil Company, he drove a bus route for special needs adults, and he was the Chairman of the Banks County Planning Commission. Jack was a member of Charity Baptist Church since moving to Banks County. He loved picking out songs on his guitar, taking care of the wild birds around his home, riding around on his golf cart, flying and taking aerial pictures with his drone, and tinkering with small engines. Jack loved to visit the north Georgia mountains with Peggy, exploring trails and enjoying views of waterfalls. Most importantly he loved spending time with his family. Jack was preceded in death by his parents, his brothers Frank Stewart Jr. and James Edward Stewart, and his sister Dorothy Stewart O’Rouke. He is survived by his wife of 51 years, Peggy, his son, Ricky, his sisters Barbara Singleton (Sammie), Frances Jackson (Royce), Patricia Schubert (Joe), Carol Harrison (Steve), and Bonnie McCarty (Tommy), and many in-laws, nieces, nephews, great nieces, great nephews, many friends, and his dog, Wally. A memorial service is scheduled for 11:00 AM on Saturday, October 9, 2021, at Charity Baptist Church, 1302 Highway 51N, Homer, GA. Arrangements have been entrusted to the Whitfield Funeral Homes & Crematory, South Chapel at 1370 Industrial Boulevard, Baldwin, Georgia 30511. Telephone: 706-778-7123.

On Wednesday, September 29, 2021, Jack Lee Stewart, of Commerce, Georgia (Banks County), loving and adored husband, father, brother, and friend, passed away at the age of 71. Jack was born on June 14, 1950, in Austell, Georgia to Frank and... View Obituary & Service Information

The family of Jack Lee Stewart created this Life Tributes page to make it easy to share your memories.

Send flowers to the Stewart family.