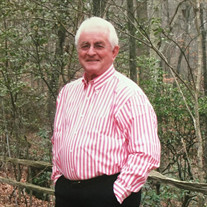 Karl Harris, age 79, of Demorest, Georgia went to be with the Lord on Thursday, September 30, 2021. Karl Harris, a local Master Craftsman of houses, lived all his life in a Harris-built house; except for 4.5 short years living in a trailer as the newly wed husband of Linda Wilbanks. His father, Reverend Henry Harris, set the standard of constructing one house at a time from the ground up with careful supervision of all other craftsmen with skills he lacked; plumbing, for example. The Harris father and son with a small crew of helpers were not fast but they were always in demand by those who wanted the best available. Karl worked for his father Henry until Henry’s health declined, then Karl’s son David worked for Karl until Karl’s health declined. Both men believed that retirement was not part of God’s plan for life on earth. David is now continuing the 74-year Harris tradition of building fine houses. Karl always used the word houses rather than the word homes because he said only God could build a fine home. Today, September 30, Karl’s spirit went to the home prepared for him by Jesus the Son of God as promised in John 14:3. Three weeks ago, he stopped being able to walk. On September 27, a low oxygen level required transportation to the ER, where they diagnosed a mass on his brain and a stroke on his left side. We moved him home under the care of Hospice and surrounded him with people who loved him. The witnesses of his decline and final passing from the house and home he built included his wife of 56 years, Linda; his son David Harris with his wife Lisa and daughters Rachel and Ashley; his son Jonathan Harris with his wife Amy and daughters Jane and Sarah; his daughter Karen Brack and her partner Anita Horsley; his sisters , Susie Newsome with her husband Gary; Louise Waters with her husband Theron; and Betty Smith with her husband Hugh; beloved family friend, Linda Church (the Other Linda) and beloved family friend, Jan Willard, his faithful caretaker for the last one and a half years. He was preceded to Heaven by his father and mother, Henry and Essie Dover Harris, and his nephew Christopher Waters. He is survived by his nephews, Tony and Jason Newsome, with their wives and their children. The opportunity to show your respect for Karl to the family will be held from 3pm to 7pm on Saturday, October 2, 2021 at Whitfield Funeral Home, North Chapel in Demorest, Georgia with the funeral on Sunday at 2pm in the auditorium of Mt. Carmel Baptist Church in Demorest, Georgia. Services will be led by two dear friends of the family, the current pastor of Mt. Carmel, Josh Taylor and the former pastor of Mt. Carmel, Charles Holland. Music for the service will be provided by Barbara James, Ricky Ward and the family of Tim and Joe Harris, Karl’s first cousins. Karl’s body will be buried in Yonah Memorial Gardens while his Spirit will be with the Lord of his life. Instead of flowers that fade so quickly, the family requests that Bibles be contributed in his memory through the local Gideon Society, PO Box 1855, Clarkesville, Ga 30523 or to the Future Growth Fund of Mt. Carmel Baptist Church, 988 US-441 Business Hwy, Demorest, GA 30535. Arrangements have been entrusted to the Whitfield Funeral Homes & Crematory, North Chapel at 245 Central Avenue, Demorest, Georgia 30535. Telephone: 706-778-1700.

Karl Harris, age 79, of Demorest, Georgia went to be with the Lord on Thursday, September 30, 2021. Karl Harris, a local Master Craftsman of houses, lived all his life in a Harris-built house; except for 4.5 short years living in a trailer... View Obituary & Service Information

The family of Karl Harris created this Life Tributes page to make it easy to share your memories.

Karl Harris, age 79, of Demorest, Georgia went to be with the...

Send flowers to the Harris family.