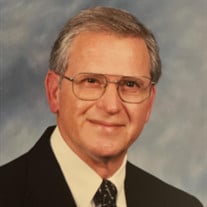 Henry "Leroy" Brock, age 90, of Monroe, Georgia formerly of Habersham County, Georgia passed away on Thursday, February 3, 2022. Mr. Brock was born on July 14, 1932 in Cornelia, GA. He was the son of John B. Brock and Grace Maybelle Smith. He had one sister, the late Ruby Burrell. While attending Cornelia High School, Leroy set the record on the football team with longest run in his position as running back with most yards run. After graduating high school, Leroy went on to serve as a communications intelligence officer in the Navy during the Korean War. Upon being discharged after 4 years of service, Leroy met his wife of 65 years, Nancy Lee Brock, while living in Washington, DC. They were married in Toccoa, GA, then went on to live & build a family in Leroy's home town of Cornelia, where they had 2 beautiful children, Susan & Ron. There Leroy also attended and graduated Piedmont College. They went on to move to Smryna, GA, where Leroy became President of Trust Company Bank where he served most of his career. Leroy went on to open several other banks in Carrollton and Monroe. Together Leroy & Nancy were given 7 grandchildren and 1 great granddaughter. Leroy was a truly special person, who enjoyed being kind & friendly to everyone he met; his family, friends & community meant so much to him. He loved to garden and spend quality time with some of his best friends, his dogs and grandchildren. Leroy helped so many through his career and touched the lives of all he encountered. He was greatly loved and will be warmly missed. Survivors include his son, Ron Brock; grandchildren, Jennifer Draper, Jessica Draper, Marcie Draper, Lindsey Latty, Sarah Brock, Mary Brock, Martin Brock; great-grandchild, Leilani Draper; and nephew, Clayton Burrell. Funeral Services will be held at 2:00 p.m., Saturday, February 19, 2022 at the Whitfield Funeral Home, North Chapel with Rev. Terry Rice and Mr. Larry Whitfield officiating. Interment will follow in Yonah Memorial Gardens. The family will receive friends from 12:00 p.m. to 1:45 p.m., at the funeral home prior to the service at the funeral home. Flowers will be accepted or memorials may be made to the Habersham Humane Society, P.O. Box 1442, Clarkesville, Georgia 30523. Arrangements have been entrusted to the Whitfield Funeral Homes & Crematory, North Chapel at 245 Central Avenue, Demorest, Georgia 30535. Telephone: 706-778-1700.

Henry "Leroy" Brock, age 90, of Monroe, Georgia formerly of Habersham County, Georgia passed away on Thursday, February 3, 2022. Mr. Brock was born on July 14, 1932 in Cornelia, GA. He was the son of John B. Brock and Grace Maybelle Smith.... View Obituary & Service Information

The family of Leroy Brock created this Life Tributes page to make it easy to share your memories.

Send flowers to the Brock family.