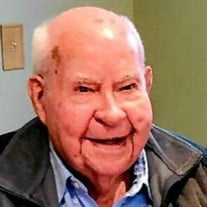 Milton Hudson Powell, age 95, of Baldwin, Georgia passed away on Wednesday, December 9, 2020. Graveside Services will be held at 2:00 p.m., Friday, December 11, 2020 at the Yonah Memorial Gardens with Dr. Kenneth Franklin officiating. All guests are requested to arrive directly to the Graveside Service at 1:50 p.m. Those in attendance are ask to please wear mask and social distance. Mr. Powell will lie in state at the Whitfield Funeral Home, North Chapel from 10:00 a.m. to 12:30 p.m., Friday, December 11, 2020 for those that wish to pay their respects. Born on January 13, 1925, he was a son of the late Thomas Spear Powell and Ruth York Powell. In addition to his parents, he was preceded in death by a daughter, Jean Hudson and grandson, Alex Norton; brothers, Tommy Powell, Hubert Powell; and sister, Lala Powell. He is survived by his wife of 74 years, Lucille Rice Powell; daughters and sons-in-law, Pat and Ronnie Parham; Peggy and Rick Powers; Mary and Randall Norton; son-in-law, Bill Hudson and wife, Nancy; two grandchildren, Alice Gunter and Jay Norton; great-grandchildren, Gracie and Judson Gunter; sister, Betty Gray; and special caregiver, Sherry Spence. In the early 1940's, before serving in the United States Army from 1944 to 1946 and seeing extensive combat action in Europe during World War II, Mr. Powell played football at the Cornelia High School Upon his arrival home after the war his interest again was found in high school football as he attended games at Cornelia High School, then South Habersham High School and Habersham Central. He attended some 600 games, while missing only three games, as a most loyal, dedicated and supportive fan of the players, coaches as well as the game of high school football. Mr. Powell was elected in 2000, the second class, into the Habersham County Football Ring of Honor, he was the oldest living of that special group. The family would like to express their gratitude to Pruitt Health Hospice and Dr. Rhett Weaver and staff for their excellent care. In lieu of flowers, memorials may be made in Mr. Powell's memory to the Habersham Veteran's Wall of Honor, P.O. Box 195, Demorest, Georgia 30535. Arrangements have been entrusted to the Whitfield Funeral Homes & Crematory, North Chapel at 245 Central Avenue, Demorest, Georgia 30535. Telephone: 706-778-1700.

The family of Milton Hudson Powell created this Life Tributes page to make it easy to share your memories.

Send flowers to the Powell family.