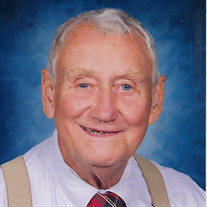 William Howard Burke, of Demorest, Georgia, loving husband and father of three sons, passed away at the age of 83. Howard was born on July 28, 1937 in Habersham County, Georgia to the late Frances and Alley Burke. He graduated from North Habersham High School in 1955 and attended Georgia Tech. In October of 1957 he married the love of his life, Eugenia Galfas. The couple resided in Atlanta, Georgia where Howard worked for Southern Bell Telephone Company. They were blessed with 3 boys born one year apart from each other. Shortly thereafter they moved to Stone Mountain, Georgia where they lived for 15 years and raised their boys. It was then that Howard decided partner in a telephone business, Key Installation, Inc. As their boys got older, he split from his partner at Key Installation to start his own telephone business, Key Four, Inc. The “four” representing the 3 boys and himself. He made the most of the “man power” God had blessed him with. Teaching his boys, not only a valuable trade, but most importantly the value of hard work. A proud father who always referred to them as “Champions of Industry.” Howard retired at the young age of 50. Several years later, Eugenia and he moved back “home” to Demorest. He enjoyed returning to his home town and being “5 minutes from anywhere.” He loved working outside, looking for the next “deal,” collecting coins and sitting on the beach with his feet in the sand next to his bride, Eugenia. However, his greatest joy was spending time with the family Eugenia and he created. Howard is preceded in death by his parents, Frances and Alley Burke, his son Dean Alley Burke, and brother-in-law, Kenneth Skelton. He is survived by his wife of 63 years, Eugenia Burke. His sons, Brett Burke (Nancy) of Demorest; Jeff Burke (Gini) of Pendleton, SC; and daughter-in-law MaryAnne Burke of Roswell, his 8 grandchildren and 12 great grandchildren, brother and sister-in-law, Charles and Gail Burke, Clarkesville, GA and sister, Jean Skelton, Cleveland, GA. A Memorial Service will be held at 2:00 p.m., Tuesday, November 10, 2020 at the Clarkesville First United Methodist Church in Clarkesville, Georgia. Inurnment will follow at the Yonah Memorial Gardens. The family will receive friends from 1:00 p.m. to 2:00 p.m. on Tuesday, November 10, 2020 at the church. The family respectfully request that social distancing guidelines be followed. Mr. Burke's tribute video https://www.tributeslides.com/tributes/show/9825846HJYCNX6Y7 Arrangements have been entrusted to the Whitfield Funeral Homes & Crematory, North Chapel at 245 Central Avenue, Demorest, Georgia 30535. Telephone: 706-778-7123.

William Howard Burke, of Demorest, Georgia, loving husband and father of three sons, passed away at the age of 83. Howard was born on July 28, 1937 in Habersham County, Georgia to the late Frances and Alley Burke. He graduated from North Habersham... View Obituary & Service Information

The family of William Howard Burke created this Life Tributes page to make it easy to share your memories.

Send flowers to the Burke family.